Born in Kaohsiung in 1982, Skyler went to the United States to study design after graduating from Chung-Hwa School of Arts. He spent time in Salt Lake City, Utah, further developing his artistic skills. In 2006, he relocated to New York and established his own studio. His main medium is acrylic on canvas, but has also ventured into the fields of video art and sculpture. In 2006, he expanded into the internet and, via his blog, allowed his work to be appreciated by a greater audience. During this time, his output was so prolific that he averaged a painting a day.
The characters found in his paintings illicit not only feelings of melancholy but also joy through the subtle reference to clowns; showing the sadness that goes hand in hand with joy. Even though the tone of his paintings is somber, Skyler's works are more exemplified by his unique and intimate style which allows for a dialogue with his figure paintings. The people in his work try to conceal the anger they feel to the real world and the construct of the United Nations. The uniformity created by the hats that they wear and their relatively homogenous visages allow for an egalatarian society with equal access to protection. At the same time, this conformity disallows closer interpersonal contact and causing them to be lonely.
“ I was a quiet child, too shy to speak with the other children at school and only speaking at home. Painting allowed me to express what I couldn't in words. When I first arrived in the United States, I focused more on design and editing and painting less so as these disciplines seemed more acceptable to others. After working for the notable illustrator Michael Economy, he sent me a few scetch books and urged me to continue painting. So I started painting again, sometimes up to a painting a day. The Norwegian interior designer Lina Tingstrom discovered my work via my blog and took the iniative to contact me. When she said that she liked my work and asked if she could buy some, it gave me a sense of recognition that is difficult to describe.”
From an early age, Skyler has stood aside and resisted conforming to the world around him. The urge to paint has driven him and allowed him to experience all the facets of life. His travels around the world have enriched his art, and as said by one of his favorite artists, “Henry Darger! The fiction in his work is really beautiful!”
The Republic of Norman is the fictitious country where Skyler's paintings are set. The people come from the far north, and are reserved as people from cold climates tend to be. “Life in Norman” was the first chapter in the series and introduced the people of the Republic. Even though the people in the country are free from ornamentation, they are always using the“in between” times and spaces to discover the meaning to their existence. Even though they may have feelings of uncertainty and anxiety about the future, they know it is only the beginning and much can still happen.
Exhibiting in Kaohsiung has always been a dream of Skyler's, and this exhibition has special meaning to us since he was a customer at La Strada ten years ago, and ten years later he was the first customer at the Tea For The Last Ten Miles Of Long Journey(半九十) and the GALLERY. Since we are so close to Skyler, we hope to help him realize his dream and help him continue on to the next phase of his life as a young artist.
Email Post 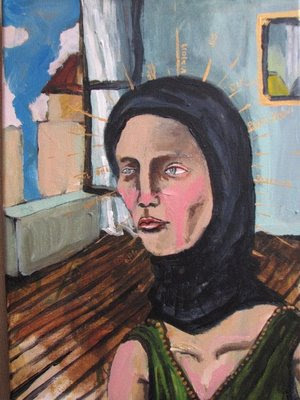